This collection contains highlights of the Barter Theatre Archives from Abingdon, Virginia. The Barter Theatre has been a cultural mainstay in southwestern Virginia since its beginning in 1933 when Robert Porterfield, a charismatic young actor and southwest Virginia native, brought a group of professional actors to Abingdon. Opening in the midst of the Great Depression, the theatre got its name from its practice of allowing audiences to barter food for admission to the theatre. From humble beginnings, Barter put down roots in the small community of Abingdon, establishing a reputation for providing performances of the highest artistic quality.

Barter is proud of its storied history, having launched the careers of many well-known actors including; Gregory Peck, Patricia Neal, Ernest Borgnine, Hume Cronyn, Ned Beatty, Gary Collins, Larry Linville, and David Birney. Today, Barter continues to fulfill its guiding principle - that people of all ages and from all walks of life hunger for, and deserve access to, the life-changing experiences provided by live theatre. By tapping into the stories and the spirit of the region’s people, Barter’s passionate professional artists and leaders, and its educational mission have improved perceptions of the region, placing it at the forefront of Appalachian art and culture.

Barter is the premiere tourist attraction in southwest Virginia, drawing an average of 160,000 patrons annually. Barter offers a repertory schedule of 19 productions and 12 Barter Player productions for children annually. In addition, Barter tours its productions throughout the Commonwealth of Virginia serving approximately 35,000 students in the past year. Central to Barter’s mission is the use of theatre as a vehicle for education, with a special emphasis on reaching those who otherwise are not exposed to the performing arts. In 2015, Barter’s unduplicated educational initiatives—student matinees, school tours, the Young Playwrights’ Festival, Barter Youth Academy, and Project REAL—helped more than 68,000 children in rural Appalachia experience the transformative power of the arts.

All images were digitized by Virginia Tech University Libraries. 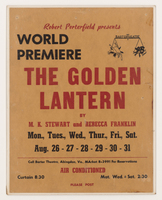 Production poster for the play The Golden Lantern.

Poster for reopening of Barter Theater. 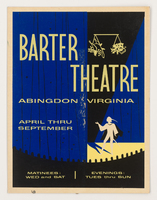 Arms and the Man

Production poster for Arms and the Man and Much Ado about Nothing in Auditorium Florida State College, Tallahassee.

Arms and the Man by George Bernard Shaw Jan 6

Production poster for Arms and the Man [at] Meredith College.

See How They Run by Philip King

Production poster for The Diary of Anne Frank.

Light Up the Sky by Moss Hart

Production Poster for Light up the Sky, a comedy by Moss Hart.

Poster for multiple plays: A Doll House| Same Time Next Year| A Misalliance| Dames at Sea| Absurd Person Singular| Side by Side by Sondheim| Luv| Fantasticks.

Skin of Our Teeth

Production poster for Herbert Nelson and Joan DeWeese in Thornton Wilder's crazy capricious comedy of the ages: The Skin of Our Teeth| The Boyfriend.

No Exit [by] Jean Paul Sartre

Barter Theatre Abingdon Virginia opens in the Round June 18 through 23.

Dad, Poor Dad, Mother's Hung you in the Closet and I'm Feelin' so Sad

Production poster for Dad, Poor Dad, Mother's Hung you in the Closet and I'm Feelin' So Sad. Robert Porterfield Opens the 32nd Season of the Barter Theatre, the State Theatre of Virginia, Abingdon, Virginia.

Desire Under the Elms [by] Eugene O'Neill

Production poster for Desire Under the Elms, directed by Owen Phillips. 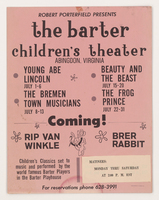 Plays include: Young Abe Lincoln | The Bremen Town Musicians | Beauty and the Beast | The Frog Prince.

Queen and the Rebels

Production Poster for The Queen and the Rebels by Ugo Betti.

Production Poster for The Knack directed by Clinton Atkinson.
View all 378 items