Considered one of the most successful still life genre painters of his time, Emil Carlsen immigrated to the united States from Denmark. He studied painting at the Ecole des Beaux-Arts de Copenhagen and the Chicago Academy of Design and at the California School of Design. Called an "American Chardin" due to the similarity of his painting technique to 18th century famous french still life painter Jean-Baptiste-SimeonChardin, Carlsen's paintings were sought after due to his delicate brushwork and manipulation of light. 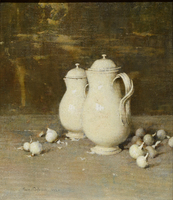