Born on October 15, 1838, Kitty was among the 88 enslaved people that lived on Rock Spring Plantation by 1863. Following the emancipation of slaves, she served as a nanny in the surrounding area, and maintained close connection with the Reynolds family. In 1878, two of Kitty's sons, Burwell and Lee Reynolds, were charged with the murder of a white man. They were defended by Andrew Lybrook, son-in-law to Hardin and Nancy Reynolds, and the subsequent trial led to the Supreme Court case Ex Parte Virginia, which ruled that jurors could not be excluded from serving on a trial on the basis of race. Today, the Reynolds Homestead continues to discuss the life of Kitty Reynolds and the other enslaved people that lived on the plantation. 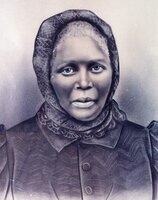